Insight & News
The global energy market is in chaos as the impact of the Corona Virus and the unexpected Russia-OPEC oil price has removed the bottom under oil and global share price settings in general. The longevity of oil price war is still unclear, as producers such as Saudi Arabia, Russia and the UAE will be carefully assessing the possible negative impact on their own economies, but at present short-term volatility is extremely high. Already reeling from the extremely negative impact of the Corona Virus, global equity and bond markets were blind-sided by the onset of a global oil war, further increasing volatility at a time when the negative impacts of the Corona Virus on global growth and trade are yet to be fully realised.

Equity markets have been in free-fall this week and blood is on the floor. The market, with all its proponents and participants, is currently ruled by fear.

As one consultant indicated, the “Fear & Greed Index” has moved to the utter left side (Fear-side). With a global mind-set of fear taking a firmer hold day-by-day, led by a sensationalist media whose editors compete to run the direst headlines, the fabric of society is disintegrating to arrests over the bulk buying of toilet paper and the global economy is grinding to a standstill.

Without doing the contrary, we will fall from a cliff.

The same is the case in upstream oil and gas.

Without taking the risk of becoming “Greedy”, “Fear” will be leading to disaster. 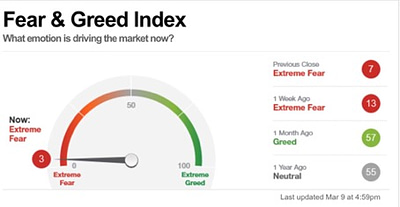 When looking at share prices and valuations of national and internationally operating oil and gas companies, the future is assessed as being particularly bleak. The Corona Virus, low global economic growth, OPEC price war and sluggish demand, is a toxic combination for listed oil and gas companies – upstream, mid- and downstream alike.

A combination of high investment and capital intense assets, a mindset (encouraged by equity analysts) of production and reserves growth at all costs and poor capital discipline has seen the yield and ROIs reported by energy companies as much lower than other sectors.

But, until now, investors were still holding vast portfolios in energy.

Pressure however is piling up, as the energy transition and decarbonization of share and bonds investments by institutional investors and private equity funds are putting a damper on yields and prices.

The current Corona Virus and oil price war combination however is causing a bloodshed not seen previously on stock markets globally, where especially energy markets are showing massive amounts of red ink. Valuations and future investment interest is very low, threatening to cause a wave of energy bankruptcies or, at the least, force much needed restructuring of asset portfolios and organizations.

The current combination of credit and revenue crunch are looked upon as one other nail in the coffin of the upstream oil and gas sector.

A general feeling has become apparent that investments in hydrocarbons in general, but especially oil, are toxic. In the coming months and years, more investors will be taking the decision to speed up their divestments in upstream companies or putting further investment discussions permanently on hold. As has been seen in the US shale sector the last couple of years, financing has almost dried up, while investors are forcing operators to focus on returns, not anymore on exploration or drilling. 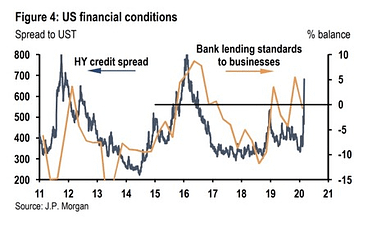 Across the whole of the upstream E&P sector the revenue focus is clear, as debts need to be repaid, but without real vast investments, production will end up being the main casualty. US shale oil is a prime example, even when taking into account the technological leaps made in directional drilling and multilateral wells, production of shale oil (and gas) will need extremely high investment levels just to keep production at current levels. If not, production decline rates of unconventionals are still above 8-10% year, some even hitting levels higher than 12% – some shale fields have seen declines of over 50% in the first year.  As oilfield services giant Schlumberger has indicated repeatedly, US shale oil production has reached its ceiling.

It’s not just US shale, global oil and gas is looking at the same situation. Even though conventional oil production decline rates are between 6-8%, continuing investments are needed. Refinancing of projects or new ventures is of the utmost importance.

Leaving aside 2020, as the effects of the Corona Virus are hopefully not going to be felt into 2021, a need for multi-trillion investments is required to keep global production even at the current. With a global demand of around 100 million bpd, decline only necessitates to find or produce additional 8 million bpd per day each year. If demand increases, more is needed still.

The global divestment urges of institutional and banks, some forced by stakeholders, others by society and ESG groups, confronts mainly IOCs and independents with a growing lack of financing options.

New types of financing are needed or other combinations including project finance combined with production sharing/commodity trading options where investors share in the gross production rather than a net company yield. There is a critical need for this as, whilst we may seem to be awash in oil and gas today, low oil prices curtailing investment decisions, hydrocarbon investment divestures, the closing of debt and credit markets and a lack of finance available to producers will soon see a structural deficit appear if produced volumes aren’t replaced. Then it will be a case of the global economy being confronted by high energy prices and absence of security of supply – a supply side price crunch that many will not see coming.

At present the only ones preparing for this new paradigm are the National Oil Companies (NOCs).

The current opportunity, based on low valuations, low oil prices, lack of financing and societal pressure, opens up the door for national, strategically operating, long-term vision holding entities, such as Aramco, ADNOC, Gazprom or Qatar Petroleum, to enter the international upstream value chain in full. For the last few years, GCC and Russian NOCs  have moved to change into a more International National Oil Company (INOC). Arab NOCs especially have set their eyes on opportunities especially to North Africa, East Africa and USA. With the current low valuations, lack of investment appetite of institutional investors or pension funds, the time for acquisitions by NOCs is here.

Access to additional reserves, outlets and production is seen as a major tool to manage the markets in future. Until 2019 most IOCs and independents were able to access financial markets without any real problems. Divestments by institutionals and the “Greta Effect” however is constraining future investments for IOCs and others. The national oils are not constrained by societal pressure or a lack of finance. At the same time, even for Aramco, as a listed company, Arab governments hold a different approach to oil and gas futures. The future of hydrocarbons is ingrained in their DNA, energy transition is part of the latter, but for a large part seen as a tool to substitute domestic oil-gas usage by renewables, to open up new hydrocarbon volumes for export.

NOCs also hold a financial strength not available for IOCs and independents. The Arab national oils are backed by their respective Sovereign Wealth Funds (SWFs), such as ADIA, PIF or QIA and all are well placed to take advantage. Take-overs or major JV operations outside of their own home turf not only is attractive, looking at valuations and upside potential, but also will diversify the risks in the case of geopolitical or regional turmoil, as well as giving them direct access to major markets.

Other NOCs, such as Sonatrach or Iraq National Oil Company, not as cash rich as their fellow Arab brothers, can also take advantage of the ongoing internationalization drive of the Gulf Arab NOCs. As Iraq and Algeria continue to struggle to attract FDI or other direct investments in their hydrocarbon sectors, combined with being confronted by a lack of appetite of the IOCs to take part, new incumbents such as Aramco or ADNOC will be welcomed with open arms.

Some prime examples of these strategies can also be shown in Egypt, where in contrast to the existing feud between Cairo and Doha, Qatar Petroleum (QP) is heavily investing in upstream and downstream assets. Kuwait, long the silent operator within OPEC, has for years been involved via Kuwait Energy in the upstream operations of North Africa’s largest Arab country. More of these cross investments are to be expected, looking at price settings and possible opportunities. Arab NOCs also still have their eyes set on US onshore assets or European operations, but production costs are seen to still be a major constraint.

For privately owned oil and gas independents and small cap listed entities, two main options for survival exist. Take the risk of addressing NOCs and their backers for potential finance or cooperation, leading possibly to a take-over scenario or find new inroads for non-state-related financial options. One could be looking at Islamic Finance or Bonds, but for most this is out of their comfort zone.

The other one, applicable to all participants in the upstream E&P sector, is to look at a new a financing option, one that is not equity (saving the E&P from dilution at bargain-basement levels) and is not debt – in which the financial partner or fund will share in the production risk with the E&P themselves.

A financial instrument entailing risk related production sharing and trading, should be addressed in future, as conventional financing is becoming more and more constrained.

Upstream operators need to become more pro-active and flexible in finding new financial partners, not just looking at the fair weathered sharks in private-equity or other existing ‘traditional’ funding methods.

The time is now to act and target new mindsets.